We opened the heating season. Admittedly shy, only an hour or two in the evening, to fill the house with a pleasant warmth. As soon as we start heating, the dough immediately begins to roll in my mind. I imagine the irresistible smell of baked dough spreading through the house. Along with the smells of baked dough, the smell of cinnamon goes well, so I decided to make the so-called monkey bread or in translation monkey bread. As its sweet and sticky balls are irresistible, I recommend you bake it in an oblong bread mold. That way, if you double the amount of ingredients, you can bake two cakes at the same time. And trust me, you’re going to need double the amount. In the original, monkey bread is baked in a kuglof mold. 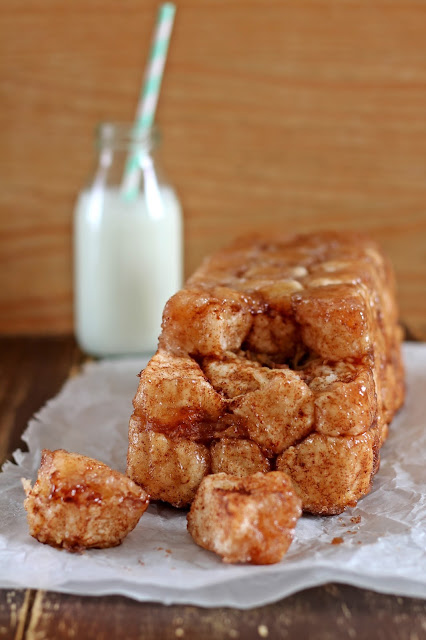 Grind the yeast in 50 ml of lukewarm water and add sugar. Let the yeast rise in the heat. In a freestanding bowl mixer put the flour and then add the olive oil, the remaining water and the risen yeast. Mix on medium speed for about 5 minutes until you get a homogeneous mixture. Cover the bowl with cling film and let the dough rise for half an hour. Spread the risen dough on a floured surface, mix briefly and divide into 4 parts. With wet hands, tear off pieces of dough that you form into balls (2-3 cm in diameter). 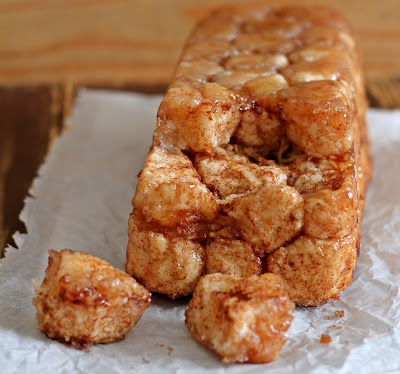 Mix sugar with cinnamon. Line an oblong bread pan with baking paper (if you are going to stack the balls in a ball mold, coat it with butter). Dip the balls in melted butter, roll in a mixture of sugar and cinnamon and arrange in a mold next to each other. Arrange grated apples between each row (preferably in the empty space between the balls). Cover the mold with cling film and let it rise for 20 minutes. Bake for 25-30 minutes in an oven preheated to 180 ° C. Remove the roast from the mold, turn over and try to refrain from cooling at least a little.